INTO THIN AIR by Jon Krakauer 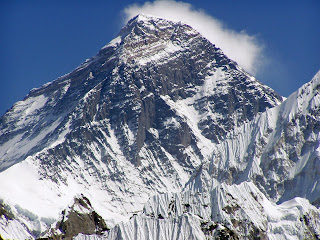 This was yet another book that had been on my shelf for years and I finally picked it up this week. My wife has been telling me to read it since forever. It recounts the 1996 Mount Everest disaster where eight climbers lost their lives. Jon Krakauer takes you right to the summit of Everest -- every passage, every face of the mountain is told in such vivid detail that once the storm strikes, you have become so familiar with the mountain that you know what places he is talking about; the many different spots where eight climbers -- including Rob Hall, one of the best climbers in the world -- lost their lives while caught in a blizzard with hurricane-force winds and temperatures at a staggering 100 degrees below zero. You get to know the climbers so well you are left reeling after the last page, unable to take your mind off of what had happened, the gravity of the tragedy, and feeling as though you too had lost friends that day. I've now begun The Climb by Russian guide Anatoli Boukreev, who was also there. I know nothing about mountain climbing; I used to think the dangers of the sport were all about the mountain itself, but with high altitude climbs like Everest (29,035 feet), the elements are far more dangerous than the actual climb. Krakauer takes you there with him, as though you are roped to him and experiencing it all with each page. It's one of those books that will stay with you forever.

***See the post above this one for my new opinion of Jon Krakauer's book***
Posted by Jerrod Edson at 7:48 PM

Email ThisBlogThis!Share to TwitterShare to FacebookShare to Pinterest
Labels: Everest