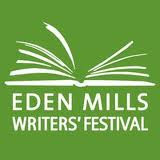 I'll be reading from The Goon at the 2011 Eden Mills Writers' Festival. This will be my second time reading there. I have also been asked to be one of the judges for the Fringe Literary Contest so I'll be busy in the next few weeks reading submissions.

According to David Adams Richards, “Read Jerrod Edson. He is one of our best young writers.” Jerrod was born in Saint John, New Brunswick, and attended Carleton and York universities. His novels The Dirty Milkman and A Place of Pretty Flowers attracted some attention, but it was The Goon published in 2010 by Oberon Press that has established Jerrod as one of the best New Brunswick writers. In telling the story of main character Jack Jones, once an enforcer in the NHL, “Edson embodies his hometown—tough, rough, haunted, full of equal parts unfulﬁlled ambition and heart,” says the Saint John Telegraph-Journal.

If you are interested in attending this year's festival, here's the link: