The brilliance of Ken Follett 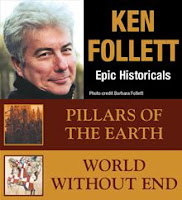 I must confess that I was somewhat of a book snob--I wouldn't go near mass market books (exception: Frederick Forsyth), thinking they were below the more literary titles out there. Man, was I wrong. Ken Follett is a genius storyteller. While I couldn't get past the first 30 pages of Life of Pi (sorry Yann Martel) which won the Booker Prize, Follett has held me for 2,000 pages in two books. There's something to be said about that. It was the most fun I've had reading. I went out last night and bought a few mystery titles for some more fun.
So why do we read? Is it to learn something new? Is it to lose ourselves? I think it's both. And let me say that there are many literary books that put me to sleep, while their so-called lesser mass market cousins have me gripped from beginning to end.


So Ken Follett has made me realize what a fool I've been as both a reader and a writer. As a reader he has opened my eyes to a whole new world. As a writer, I could only dream of telling a story with characters as vivid as his; or of a plot that keeps me up late at night, turning page after page wondering what will happen next.
I've said it before and I'll say it again: I'm a better writer for having read Ken Follett. If you're a writer, make him part of your essential reading list.
Posted by Jerrod Edson at 5:14 PM

It's funny I read Pillars of the Earth back in Ottawa years ago, a recommendation of my then-Product-Manager Ian. I thought it was terrific. But it is the only Follet I've read. It's funny because he is more often thought of as a writer of spy thrillers, a genre to which I am partial. I really should put world without end on my To Read List.

I loved it...it hooked me just as much as the first...But the first was the first, and it can't be matched...I also finished two of his spy thrillers: Triple, and The Eye of the Needle--both great page-turners...what a storyteller...