The other day a friend of mine asked me to name my three favourite film performances of all time, and while I realize this is a blog about literary things (I'm smack in the middle of a new novel so I don't have much to say about my work these days), the three films below all have literary connections, and so here they are:

1-Richard Harris in Wrestling Ernest Hemingway (1993). Harris plays a washed up sea captain living out his days in Florida. His claim to fame is that he once beat up Hemingway. Teamed up with Robert Duvall, it really doesn't get any better than this. 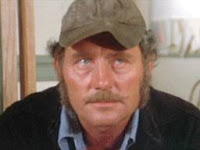 2-Robert Shaw in Jaws (1975). I loved Peter Benchley's novel about the greatest rogue shark of all time, but it was Shaw's performance as Quint that made the movie (dare I say it) better than the book. It's also my favourite movie, cheesy mechanical shark and all.