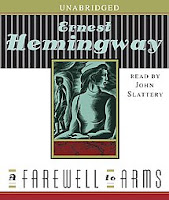 Catherine Barkley, the nurse who sweeps Lieutenant Frederick Henry off his feet in Hemingway's masterpiece, A Farewell to Arms, is clearly described early on in the novel as English. But later, when Barkley is discussing with Henry what would happen if they got married...

"But darling they'd send me away."
"Maybe they wouldn't."
"They would. They'd send me home and then we would be apart until after the war."
"I'd come on leave."
"You couldn't get to Scotland and back on leave..."

why hasn't anyone else noticed this? From such a "great writer"! Where was his editor?