KILLER ON THE ROAD in today's Telegraph-Journal 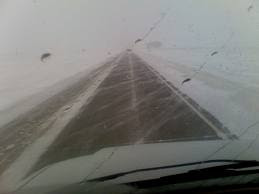 Merry Christmas!
Here's a short story I wrote a few years back, published in today's Telegraph-Journal...

Killer on the Road

Leonard Simmons had never picked up a hitchhiker before. But it was five o’clock on Christmas Eve and the snow was falling heavily and all he could see through the windshield was white, wherever he looked, and he felt bad for the figure standing by the highway alone. He pulled onto the shoulder and stopped the car. The man opened the door and got in.

He was huge, and he smelled of lumber and wet wool. He had to slump so his head wouldn’t hit the roof, his knees pressed against the glove box. He brushed the snow from off his pants and kicked his boots together. The snow fell in clumps.

Leonard could smell cigarette smoke, and mixed with the lumber and wet wool, it was not pleasant in the heat and small space of the car. “Still snowing,” he said. “I don't think it's ever going to stop.”

The man did not respond, and very quickly there was an awkward silence. The man grunted and brushed the snow from his sleeves.

Bags and gift-wrapped boxes were piled clumsily in the back seat. Leonard had been Christmas shopping all afternoon. He had started and finished his entire list that day and was proud of himself, even now, as he pulled the car back onto the highway, the tires skidding before settling into the tracks of another car.

Leonard’s wife Connie had mentioned an African gift shop downtown on Prince William Street, and how she had seen two wooden elephants, “…the most beautifully crafted things you’ve ever seen—painted white with gold tusks, all carved from the same tree. And the proceeds go to the effort against poaching. Do you know how many elephants are killed each year? The poor creatures, they’re nothing but harmless giants. You’ll be helping them without even knowing it.” It was the one gift in which Leonard knew he couldn’t go wrong.

The snow was just starting to fall when he had left the mall and headed downtown. He parked on Water Street then skidded up the alleyway, careful not to slip in the snow, and onto Prince William to the African Gift Shop.

Twenty minutes later he was pleased with himself as he walked back to the car holding the box of wooden elephants, wrapped in fine paper with a card made of wood which had a lovely little African poem Leonard never bothered to read. He smiled as he imagined Connie on Christmas morning. And I’m helping them, the harmless giants, he thought, repeating her words and chuckling to himself, remembering how she had said this with such saddened eyes, when he knew, as wonderful and as lovely as she was, that all she really wanted was a good gift.

The snow fell in thick heavy flakes. Roy walked by the Bourbon Quarter and looked inside, at how cozy it looked, and he went in for a beer. He sat at the bar next to two men. They were talking and drinking as though they’d been there all day—comfortably and loud and without restraint.

One of them was talking about how he had hitchhiked from Fredericton that morning. And he was very loud. “Only took me an hour and a half. Got dropped off in Gagetown. It was just startin to snow and I thought I’d be stuck out there all day freezin my arse off, but the next car stopped and drove me all the way to Harbour Station. I said to myself when he dropped me off, I said: Andy, you’re a lucky bugger—Not too bad, an hour and a half all the way from Fredericton.”

Leonard was thinking of this a half hour later as he came upon the figure standing on the side of the highway, his silhouette appearing out of nowhere, standing tall with his arm out, his feet buried in the snow.

“Where is it you're heading?” Leonard asked as he drove.

The man grunted and nodded. “Up a ways—Hampton area.”

Leonard was also going to Hampton, and very quickly the regret of stopping overwhelmed him. And so he lied. “I've got to turn off at the Hammond River Bridge. I’ll let you off there.”

The man grunted again. Leonard could not tell if it was meant to show displeasure or complacency. But he felt relieved now that a plan was in place. And again there was an awkward silence. The radio went fuzzy and Leonard fiddled with it. The storm, he thought. This could only happen to me. Then he started to sweat. He turned down the heat and remembered that only a few minutes ago he was alone and happy, thinking of the gifts in the backseat and tomorrow was Christmas and why the hell did he ruin it all by stopping? He took a quick glance in the mirror and saw the box with the wooden elephants.

“So where are you from?” Leonard asked. It was a good question.
“Montreal.”

“Did you hitchhike all the way from there?”

Leonard cleared his throat. “I can't see too much with all this snow. I barely even saw you. When I went to town this morning there was nothing at all, not a flake. I was at the mall for a few hours and came back out to this. I can't believe how much has come down. I can't see a thing.” He did not want the silence to come again and so he continued. “They only called for a few flurries, and look at it. Damned weatherman; I'm telling you, I don't know how those guys keep their jobs. If I made as many mistakes as they did I'd get fired in a second. They don't know a thing.” He realized he was talking too much now, and he swirled in the silence. “No sir, not a thing.”

Silent Night played. Leonard almost grinned at the irony. “So you're spending Christmas in Hampton?”

“Staying with friends or family?”

Leonard turned up the radio and the music was scratchy and irritating. And although he knew the radio could do nothing, no matter how loud, it covered the silence. After a few commercials from companies wishing everyone well during the holiday season, Holy Night was played and Leonard hummed along, losing himself in the snow and trying to focus on the road, trying to forget this huge man, a man he knew nothing about, sitting so close to him and not speaking.

Then he noticed the man starting to shift uneasily in his seat. What’s he thinking? What’s he planning? The man looked out his window and Leonard took a quick glimpse of him—his old pants, his work boots, his jacket rough and worn. He’s a frickin giant, Leonard thought. Then he started thinking of all the stories he'd heard about hitchhikers; of cars found abandoned and the drivers dead in the trunk or buried in the woods along some dirt road. It starts out just like this, he thought. Just like this, out on the road in a storm, alone.

He thought of the flashlight under the seat. He could grab it if anything happened. It was a big, heavy-duty flashlight that could do some damage if he were able to get a good swing at him. But he did not want to have to grab it. He had never been in a struggle before. His palms got sweaty. He felt a line of sweat trickle down the middle of his back. He did not turn down the heat—he had done this once already.

Leonard saw as the man took another uneasy look out his window.

Then suddenly, through all the whiteness, Leonard saw the lights of the gas station near the Hammond River Bridge. It was an angelic sight.

Leonard signaled and turned off the highway, stopping in front of a small church that looked down onto the river. It was an old black and white church built close to the road, and through all the snow Leonard could only see the steep slant of the roof and the blurred outline of the long narrow windows. He could not see the bridge.

Leonard placed his hand down between the door and the seat and felt the cold plastic of the flashlight.

The man grunted and zipped up the front of his jacket and tucked his chin into the collar. Then he opened the door and climbed out. The wind and snow blew into the car, and Leonard felt the chill of the fresh air blowing in, and the suction of the stale air leaving.

Before closing the door the man leaned in. “Thanks for the lift. Merry Christmas.”

“Same to you,” Leonard said, but the door closed before he said it.

The flakes settled on the windshield and melted. Leonard pulled the car away and smiled. He was alone again. But only a moment passed before he realized what he had just done. He thought of the man standing out on the highway with the snow blowing in his face. His eyes caught the gifts in the backseat and he thought of Connie again, at home, warm in front of the fireplace, opening the box with the wooden elephants.

Leonard stopped the car and got out and walked a few meters down the road. The snow fell all around him. He couldn’t see the church, but he saw the blurred outline of the steeple. He called out but there was no reply, just the snow falling and a fairy-tale quiet. The snow smoothened over the ditch and covered the trees. The branches drooped from the weight of snow, and underneath them were bare patches of black earth. Up the power lines the boxes were puffy white, the lines thick and running smooth across the whiteness. Leonard called out again, but again there was no reply. He stood a few more seconds, looking into the whiteness, the flakes tickling his eyes, and then he turned and went back to his car, retracing his steps, deep in the snow on the road.