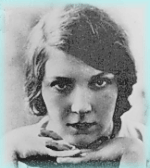 Jean Rhys is the most underrated writer who has ever lived. A true genius, and one of my biggest influences. Her novels include Postures, (1928) (released as Quartet in 1929), After Leaving Mr. MacKenzie (1931), Voyage in the Dark (1934), and Good Morning, Midnight (1939), all published to little fanfare. She would not resurface for nearly thirty years, when the publication of Wide Sargasso Sea in 1966 marked her triumphant return from obscurity and cemented her as one of the most important writers of the 20th Century. When asked about her new found fame, Rhys replied that it had come too late. She died in 1979.
Posted by Jerrod Edson at 8:49 PM